The Sword of Damascus Monument
Dimension: 40 x 17 meters.
location: Omayyad square
The monument consists of identical facets of stained glass in a shape of a sword.
1998

The Sword of Damascus Monument is one of the most famous monuments in Syria, and is considered as a Symbol of Damascus city. This monument has been established in Umayyad Square in Damascus in the early 1960’s. At first designed by the Syrian artist Abdul Qadir Arnaout, it was initially composed of a set of flags that represent the countries participating in the Damascus International Fair. In 1998 the design has been changed by artist Ehsan Antabi who replaced the previous one with a decorative stained glass which blends the Damascus rose with fire in one abstract design. It soon became one of the most important symbols in Syria today, and inspired logos for the Syrian television and the Damascus International Fair. 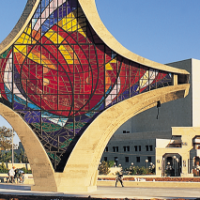 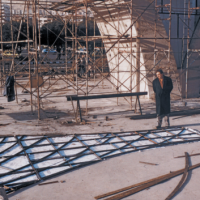 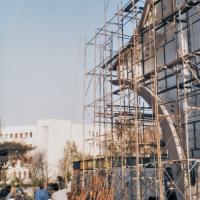